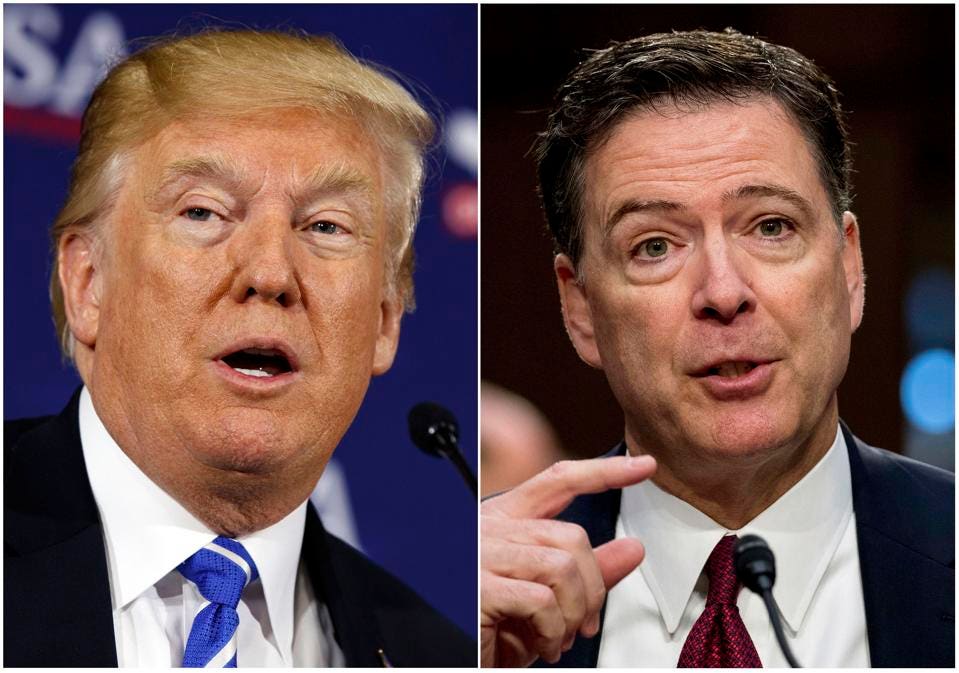 For anyone obsessed with high-character leadership, these are heady times. On a whirlwind tour to promote his new book, A Higher Loyalty: Truth, Lies, and Leadership, former F.B.I. director James Comey has single-handedly made the term “ethical leadership” a top news story. In the wake of his ABC News interview with George Stephanopoulos, it therefore makes sense to ask: Has the former FBI director himself evinced ethical leadership?

By Comey’s own admission, there were at least two serious lapses that involved things he did not say to President Trump during private meetings the two had. I’ll recap what those lapses were, what Comey could have done instead and how all of us can evince stronger ethical leadership in our own work by learning from these incidents.

On January 27, 2017, the president invited Comey to dinner at the White House. Comey realized early on that it would just be the two of them, and that made him uncomfortable. What follows is an edited and condensed version of the lengthy ABC News interview that describes what happened.

James Comey: The president said, “I expect loyalty, I need loyalty.” And I did not reply, because I knew I couldn’t say yes, I couldn’t nod, and so I just froze and stared at him.

George Stephanopoulos: Why not say no?

Comey: That’s a fair question. I think because I was caught totally by surprise. I couldn’t think of a clever response. And by the second time he came back to it, I had my wits about me and had a better answer. I said, “You will always get honesty from me.” And he paused and then he said, “Honest loyalty,” as if he was proposing some compromise or a deal.

A Message From The Quarantined Class Of 2020

The Essence Of Resilient Leadership: Business Recovery From COVID-19

And I paused and said, “You’ll get that from me.” Maybe it would’ve been better to give a more explicit: “Sir, I can’t promise you loyalty. Given the nature of my role, I can promise you I always tell you the truth.” But in the moment, frankly, it didn’t occur to me. And maybe I didn’t have the guts to do it.

On February 14, Comey went back to the Oval Office.

Stephanopoulos: He wanted to talk about Mike Flynn.

Comey: He said he hopes I can let it go.

Stephanopoulos: And when he said that, you thought?

Comey: He’s asking me to drop the criminal investigation of his, now former, national security advisor.

Stephanopoulos: What do you say?

Comey: I said, “He’s a good guy.” And so then full-stop. And there was a brief pause. And then the meeting was over.

Comey: Maybe I should have. Again, it’s one of these deals where it didn’t occur to me he was going to ask me to drop a criminal investigation. And so a little bit of it is the shock of it.

Let’s examine this from an ethical perspective.

The Good, The Bad And The Ugly

Comey shows high character by admitting that he could have done better. How many current or former public officials say such things? Watch the interview here, and you’ll see a man wrestling with some of the most difficult decisions that a person in public service can make.

As a comparison, watch Donald T. Regan, White House Chief of Staff under President Ronald Reagan, tell Larry King on CNN, “Once I make a decision, that’s it. I don’t look back.” No regrets and no second-guessing. This isn’t something most people can relate to.

I can’t imagine how difficult it must be for a senior government official, even the head of the F.B.I., to stand up to a sitting president and say, “I cannot do in good conscience what you’re asking me to do.” No matter what you may think of the person occupying the office, the office itself commands the greatest respect. One can emphathize with Comey’s predicament.

But speaking truth to power comes with the territory. Courage is one of ten crucial qualities of high-character leaders, and Comey admits that he lacked it when it counted most.

By not making it crystal clear to President Trump that Comey’s ultimate loyalty is to the Constitution, the principle of justice and the American people, James Comey failed to exemplify ethical leadership.

Standing up to the president may not have made a difference in the outcome, but sometimes we’re called upon to do things because they’re the right thing to do, whether or not we can affect the positive change we seek. January 27 and February 14, 2017 were two of those times.

We can’t undo the past, but the past can undo us if we fail to learn from it. You and I and everyone else watching the Comey drama unfold can commit ourselves to speaking up when the situation calls for it, or we can follow in his footsteps and, to borrow a phrase from George Stephanopoulos’s own memoir, hope that others will forgive our all-too-human sins.