Why Is Robert McKee’s Marketing Strategy The Only One That Works? 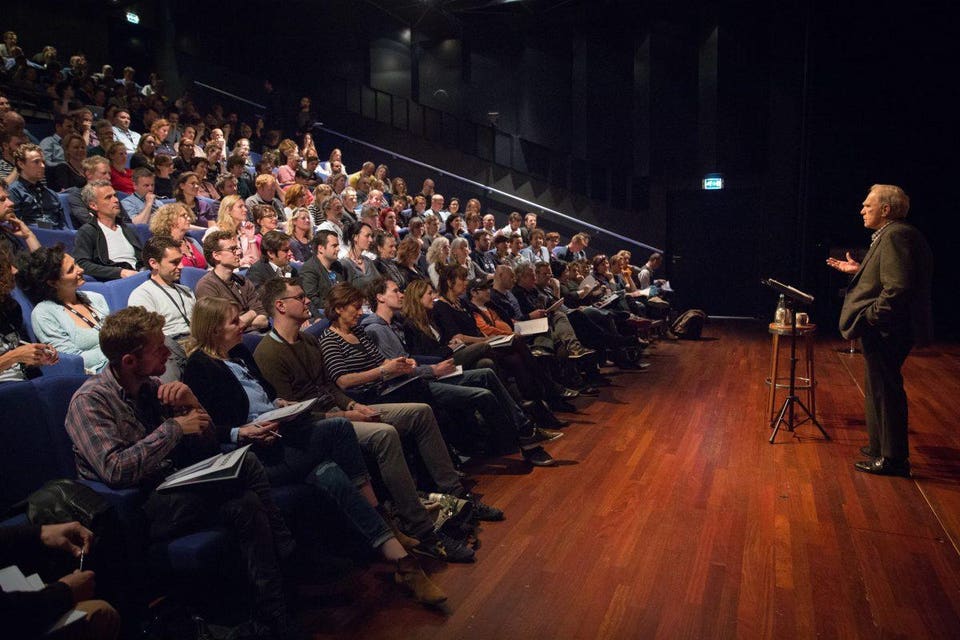 Robert McKee teaches the art of storytelling in Amsterdam

The only way that companies will be able to succeed in their marketing and sales efforts is to adopt a radical strategy that has rarely been used before: telling the truth.

So says Robert McKee, the most well-known and respected teacher of the art of storytelling in the world. For over thirty years he has shown screenwriters how to tell a good story well. Among the people who have taken his multi-day story seminar are Peter Jackson, Jane Campion, Geoffrey Rush, William Goldman, Meg Ryan, Kirk Douglas, John Cleese and Russell Brand, and over 60 former students have won Academy Awards.

He has also achieved one of the most highly coveted honors in popular culture: a cameo on the FOX Broadcasting Company’s The Simpsons (season 28, episode 19, “The Caper Chase“).

McKee has expanded the focus of his teaching to include content he and Tom Gerace, CEO of Skyword, Inc., have created specifically for marketing, advertising and sales leaders. He and Gerace teach a seminar and have written a book called Storynomics: Story-Driven Marketing in the Post-Advertising World.

After taking the course or reading the book, McKee hopes that chief marketing officers (CMOs) will have one response. “First, they should be in a state of terror,” he says. Marketing executives must realize “that unless you learn to communicate with your fellow human beings in a storified way, you will be out of business, because advertising that has been the mode of marketing for 200 years is fast on its way out.”

I sat down with McKee in his New York apartment for a fascinating, far-ranging conversation about why honesty is the only financially responsible policy in advertising from here on out and how the art of storytelling plays a crucial role in this strategy.

Bruce Weinstein: If I understand you correctly, you want CMOs to be aware of precisely what effect they want to have.

Weinstein: When I was in graduate school, the president of the Kennedy Institute of Ethics at Georgetown University told us, “Advertising is an immoral practice, because it is about the creation of the perception of a need.”

McKee: Yes. The perception of a need that does not in fact exist. Of course it’s immoral.

Weinstein: No one needs an iPhone.

McKee: Yes they do.

Weinstein: We want one.

Steve Jobs understood that what people need is beauty, and he looked at those old computers, those green boxes sitting there with all those wires coming out. They’re not only ugly, but they’re inconvenient. You can’t move them, you can’t carry them around.

He imagined something that was really beautiful to the eye, tactile to the hands, that you enjoy carrying around that was portable, that was convenient, that would go into your pocket — the efficiencies that it brings were magnitudes of imagination nobody else had.

Everyone else was thinking down at the gravel level of usefulness, and he had vision.

Weinstein: He made them works of art.

Weinstein: Let’s look at another ethical issue with advertising. Your primary pillar in Story, the first book, and your teaching up until Storynomics is: Write the truth, tell the truth. I don’t believe you used the word “ethical,” but you do say the only obligation a writer has is to tell the truth.

With truth as being so foundational in your work, how does that fit in with what advertising is all about?

But with a story-based approach to advertising, a story’s not going to work unless it’s truthful.

Weinstein: Let’s take this down to street level. Beer. “Tastes great, less filling,” went one slogan. You know the people who coined that phrase didn’t believe a word of it. Because it doesn’t taste great, and it isn’t less filling.

McKee: I know, but they didn’t tell a story. They made a claim, and that’s a brag.

Weinstein: But is it ethical for your model of storytelling to be appropriated by an institution that historically is about anything but telling the truth?

McKee: If you consistently lie you will go out of business, because if in fact your product does not work, your service does not perform, there will be people who create a product that does work and a service that does perform, and they will put you out of business.

Consider the new Bud Light ads. [Laughs] There’s a medieval setting. They’re hysterical. All they say, the only claim they’re making there is that if you don’t have Bud Light you’re miserable. If you have Bud Light, you’re happy.

Which is true, because if you’re sober you’re miserable. If you’ve got a couple drinks in you, you feel better.

McKee: Whether it’s Bud Light or a glass wine or a shot of whiskey, you go from negative, life is miserable, to, well, I could deal with this.

Weinstein: Even though you don’t use the word ethics or character, your book is riddled with ethical concepts. You talk about keeping your promises, protecting confidentiality, telling the truth.

McKee: The first step for marketers to take is to ask is: Who is my audience? To whom am I telling this story? What are our demographics?. Fine, that involves collecting data. The second step is: What do these people want? What is lacking in their life, what do they not have that they want, even if it’s an unconscious desire? Like Steve Jobs’ understanding that people want beauty and convenience.

If the answer to that question is not truthful, you’re in deep trouble.

Weinstein: So in the short term you might make a killing through clever ads, but in the long run you-

McKee: That’s just a by-product of scale. If you have the money to spend to saturate a marketplace with selling, people will initially experiment. They’ll try, but it won’t last.

That step of identifying what your target audience needs and wants has to be an honest step, or it’s just going to run around and bite you because it will baffle people.

Weinstein: Are there different kinds of questions that your business audiences ask you, compared to the questions you get from screenwriters?

McKee: The central problem for business leaders is that once they think they have some understanding of the story, the question is: How do I do this?

If you work for a company that’s large enough, you hire a creatives. The problem with hiring creatives though is just because they’re so-called creatives doesn’t mean they understand the art of storytelling any better than you do.

Weinstein: Let’s turn to sales. With your story-based approach to business, sales is about finding out what the truth is and presenting that in a way that will be sticky, emotionally resonant. Not: What strategy can I come up with to separate this person from their money?

McKee: The person came in your store presumably because there’s something missing from the shelves of their life and they want to fill it with just the right strawberry jam, or else they wouldn’t be in the store.

So they’re already there reaching in their pocket willing to separate themselves from their money, and that’s not unethical. What is unethical is to sell them the cheapest strawberry jam for the maximum amount of money. That’s unethical and foolhardy, because you just lost a client.

Weinstein: Why do you care so much about story?

McKee: It’s two things. One, if you accept the premise that life is intrinsically meaningless, how do we find meaning? There’s theology, philosophy, science and art. The four wisdoms. To read, to think about and to embroider into your life, to enrich it, to give your life meaning, the most powerful source of meaningful experience that you can inculcate into your life is storytelling.

This is why we’ve done it. We’ve done it for hundreds of thousands of years. We have told each other stories in order to make meaning out of meaningless.

The second thing is that not only is life meaningless intrinsically, but it’s full of suffering, so it’s painful. Anything that a human being can do to alleviate the pain in themselves and the pain in others is a meaningful positive action.

Story, because it makes sense out of senselessness and enriches us in those ways, reduces the suffering.

Weinstein: Last question. In fifty words or less, why should a business leader read Storynomics?

McKee: You must learn the future of communication in business, and the future is to express yourself to people in story form.